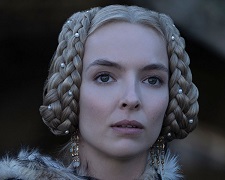 Today’s legal system in Australia prescribes that if someone is charged with a criminal offence, guilt must be proved “beyond reasonable doubt” for any punishment to be handed down.  That certainly wasn’t the case in 14th Century France.  Although attempts had been made by several leaders to stop the practice during the Middle Ages, trial by combat still existed across Europe.  The Last Duel is based on actual events, set in the year 1386, and depicts the final judicial duel sanctioned by the French government.

The charge in this case was a heinous one.  Marguerite de Carrouges (Comer) had accused the wealthy squire Jacques Le Gris (Driver) of coming into her home whilst alone, pinning her down in the bedroom, and raping her.  Women of the time were not allowed to level charges against a man and so the responsibility fell on her husband, Jean de Carrouges (Damon), to commence legal proceedings.

Jean knew he couldn’t win an ordinary trial (a woman’s testimony would never override that of a man) and so he convinced the young King Charles VI to allow the judicial duel.  Citizens would watch from atop the battle ring and, if you believed in the nonsense of the times, God would deliver a verdict by deciding who lived and who died.  There was an added catch in this case.  If Jean were to lose the dual, his wife would be declared a liar and subsequently burned at the stake.

It’s a gory yet fascinating piece of history brought to the screen by Oscar nominated director Ridley Scott (Blade Runner, Gladiator).  Co-writers Ben Affleck and Matt Damon (Good Will Hunting) felt the story would best be told in three parts.  We begin with Jean’s perspective, that’s followed by the viewpoint of Jacques, and we culminate by seeing things through the eyes of the victim, Marguerite.  Independent filmmaker Nicole Holofcener (Enough Said, Can You Ever Forgive Me?), working closely with #MeToo groups, was brought in to write Marguerite’s scenes and provide a strong, honest look at her important character.

I’m not fully convinced by the structure.  The tension ratches up during the opening act… before being reset at start of chapters two and three.  Small details are altered in each version of events, wisely highlighting that truth varies depending on who’s telling it, but there’s no doubt as to Jacques’ guilt and so, when we see things play out for a third time, the repetition wears a little thin.  This format also pushes a few of the supporting characters too far into the background.  As an example, I’d prefer to have seen more of Jean’s opinionated mother (played by the talented Harriet Walter).

It’s a minor quibble though.  The three lead performances are strong and, as the pick of the bunch, Jodie Comer (Killing Eve) continues her breakout cinematic year after the success of Free Guy.  Kudos to her hair and make-up team also.  It should come as no surprise to see Ridley Scott direct a great battle sequence and while it’s a lengthy wait given the film clocks in at 153 minutes, the gritty, violent, well-researched climax serves as a fitting finale.

Offering a glimpse into an era rarely depicted on screen, The Last Duel tells a worthy tale.