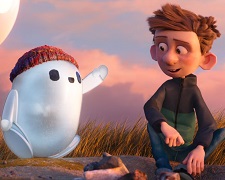 When I attended high school in the first half of the 1990s, we had no internet or mobile phones.  When you wanted to chat to your friends of an evening, you’d annoy your parents by tying up the land line at home.  Much has changed over the last three decades.  A colleague from work has an 8-year-old daughter who is the “IT guru” at school at helps classmates with iPhone app and connectivity issues.

Ron’s Gone Wrong is an animated feature that provides an exaggerated look at the way technology shapes the lives of impressionable kids today – both good and bad.  Small, two-feet tall robots, known as B-bots, have been developed by a giant Apple-style conglomerate to accompany kids to school and help them make friends.

These robots are the new “must have device” for the younger crowd (it’s not explained why adults don’t use them).  They provide their owners with self-confidence and, by syncing with the broader network, help point the kids in the directon of others with similar interests.  They’re like smart phones in the sense that owners can upload photos and videos through the robot to obtain “likes”.

The opening scenes will have you feeling sad and sorry for the film’s kind-hearted protagonist, Barney (Grazer).  He’s shy and introverted and so struggles to make friends at school.  He’s also excluded from activities in the playground because he doesn’t own a B-bot – partially because his family is poor and partially because his father (Helms) believes in making friends the old-fashioned way (a valid point that could have been explored further).

It falls upon Barney’s out-of-touch grandmother (Colman) to remedy the situation by purchasing a cheap, broken B-bot that fell from the back of a truck.  The robot (voiced by Zach Galifianakis) becomes known as Ron and, thanks to faulty programming, it initially causes more problems that it solves.  It’s not long though until the pair become friends and Barney’s eyes are opened to the importance of a “two-way street” friendship.

Ron’s Gone Wrong doesn’t try to overcomplicate things and tells a simple story.  The messages are laid on thickly, conflicts are resolved easily, and there’s a one-note villain (the head of the B-bot company) who gives you someone to root against.  It’s designed to be easily digestible for kids and, for better or worse, skirts around questions that would be tricky for non-adults to understand (such as using B-bots to illegally spy on people).

Rising star Jack Dylan Grazer (It, Shazam) and the experienced Zach Galifianakis (The Hangover, Birdman) tap into the energetic side of their personalities and do a great job brining Barney and Ron to life.  The action is too frenetic in places but thankfully, there are enough nice moments where these two characters can sit, talk and open up.  They’re the best scenes in the film.  The supporting players don’t offer much but keep your ears peeled for Olivia Colman’s (The Favourite) fun performance as Barney’s grandma.

The first movie to be made by the London-based Locksmith Animation studio, Ron’s Gone Wrong is cute and wholesome.