Review: How to Please a Woman 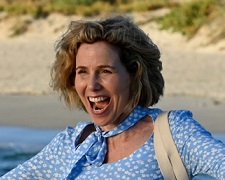 I’m too time-poor to watch much television but one show I admire is Ted Lasso.  The broader storyline makes no sense.  Could you imagine anything remotely plausible in relation to a top club in the English Premier League?  The on-field soccer scenes, such as one where a dog is struck by a football as part of a penalty shot, are about as credible as a Hans Christian Andersen fairy tale.

The reason the series works is because of the interplay between the likeable characters and the way they cathartically open-up about their troubles and concerns.  The writers tackle real, serious issues and delve into important topics like mental health and empathy.  It reminds us that the positivity and confidence people display publicly doesn’t always marry up with what they think internally.

How to Please a Woman is an Australian movie which appears to have been cut from the same cloth.  The storyline makes even less sense, but it’s designed as a warm-hearted crowd pleaser about finding happiness within one’s self.  English actress Sally Phillips (Bridget Jones’s Diary) steps into the shoes of the lead character, Gina, and retains her British accent – explained by the fact she grew up in the UK and moved to Australia with her lawyer husband (Daddo).

It requires a lengthy set-up but to simplify as best I can… the middle-aged, timid Gina loses her office job at an insolvency firm and, without telling her husband, buys a small, financially strapped removalist business with four male employees.  Inspired by a birthday gift from her close friends, she transforms it into a company which is part cleaning, part prostitution.  It turns out there are a lot of single women interesting in paying a guy to sleep with them and also clean the house (not necessarily in that order).  I can’t understand the business model, from the finances to the hopeless website, so best not to think too hard.

It’s odd that a film promoting the positives of (illegal) prostitution is so conservative with its approach.  There’s very little sex/nudity, minimal discussion of kinks, and almost no insight into the two main guys.  If trying to promote the wonders of lovemaking, why not delve into the valid reasons why the young, surfy-looking Tom (England) is willing to have sex everyday with different women?  Instead, we get a weak, poorly developed subplot involving him trying to reconcile with his pregnant ex-girlfriend (a superfluous character if I’ve ever seen one).

There are glimpses of a better movie.  Gina’s husband has lost his sex drive and they haven’t been intimate for close to two years.  She harnesses the courage to address this issue by talking with her helpful friends and exploring other “alternatives”.  The best conversations in the film are those between Gina and Steve (Thomson), a colleague with deep-seeded problems of his own.  Their connection is contrived but at least their conversations feel open and authentic.  We finally get to see behind their exterior!

Writer-director Renée Webster (The Heights) is trying to have it both ways with an edgy, sexy comedy which escapes with a mere M-rating but I’m not convinced it works.  The finale provides further proof.  How to Please a Woman might satisfy some but I was left unfulfilled.