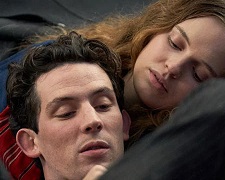 There’s a 1970s song from Odyssey called “Our Lives Are Shaped by What We Love” and it could easily be an alternate title for this new film from French director Eva Husson (Girls of the Sun).  It’s centred on Jane Fairchild (Young), a woman described as being an “occupational observer of life”, who draws from her impeccable memory to write award-winning books.  Her past loves have served as inspiration and, through the power of literature, made her the success she is today.

Mothering Sunday takes us back to a single day in March 1924 which Jane has never forgotten.  Orphaned at birth, a young Jane had found work as a maid for the Nivens (Colman and Firth), a well-to-do British couple living on a spacious estate.  The work was straight forward but the atmosphere was sombre.  The Nivens had lost both of their sons in World War I and they now go about their lives in a dull, muted haze.  It’s as if they refuse to do or say anything which could provide a glimpse of pleasure.

Provided with a rare day off work, Jane spends it in the arms of Paul Sheringham (O’Connor), the handsome son of the Niven’s wealthy neighbours.  These two are clearly in love but societal customs will deny them a chance at lifelong happiness.  Having lost two older brothers of his own in the war, Paul must follow the wishes of his parents to get married and become a lawyer.  They’ve arranged for him to wed Emma Hobday (D’Arcy), a posh socialite who isn’t too enamoured by the match.

Based on the 2016 novel by Graham Swift and adapted for the screen by Alice Birch (Lady Macbeth), Mothering Sunday is a simple story elevated by Husson’s direction.  None of these characters are in a hurry.  They speak softly, they move slowly, and their emotions are muted.  Without giving too much away, there’s a scene in a bedroom where someone proposes marriage.  They act in such a subdued manner than you’d think it was an ordinary, everyday event!

It may sound sluggish but the style fits the material.  With dialogue kept to a bare minimum, the film’s moods are built around the beautiful cinematography of Jamie Ramsay (Moffie) and the seductive music score of composer Morgan Kibby (Girls of the Sun).  The two lead performances from Australian Odessa Young (The Daughter) and Englishman Josh O’Connor (God’s Own Country) are terrific.  Through their passionate lovemaking and simple small talk, you get a strong sense of the connection that Jane and Paul share.

I wasn’t sold on the fractured timelines (did we really need to see the older Jane?) and the supporting cast don’t have much to do (wanted to spend more time with Emma D’Arcy’s character) but Mothering Sunday is an above average drama that speaks to the lingering impact of love and tragedy.