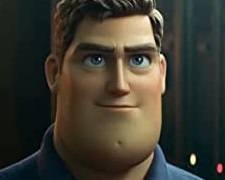 If you’re familiar with the original Toy Story from 1995, you’ll know Buzz Lightyear was a new toy owned by that film’s 6-year-old protagonist, Andy.  Andy’s parents bought the toy because it was the lead character in their son’s favourite movie.  As we learn from the opening credits here, Lightyear is that movie.  You could therefore describe it as the animated equivalent of “a film within a film” in that it exists inside the Toy Story universe.  Hope that’s not too confusing!

Considering it was the favourite movie of a 6-year-old, it won’t come as much surprise to see this pitched at a younger crowd.  With its simple storyline, there’s clearly more for kids than adults.  It begins with Space Ranger Buzz Lightyear (voiced by Chris Evans) inadvertently crashing his spaceship on a desolate planet.  It leaves him and the large crew marooned with no chance of rescue unless they can develop the technology to get the spaceship working again.

Two well-worn themes are pushed strongly, perhaps too much so, throughout the film.  The first is that of teamwork.  Buzz is very much an individual who wants to do things by himself.  That’s partly because he feels guilt from the accident and wants to the person to “fix” things… and it’s partly because he’s following the space ranger code and doesn’t want to put the lives of others in danger.  He soon learns he’ll need the help of an eccentric group of misfits to get the job done.

The second theme is that of change and the importance of looking forward as opposed to looking back.  The marooned crew have been stuck for several decades (time moves quickly in the same vein as the ocean planet in Interstellar) and across that time, guided by generational growth, they come to see the planet as a new home.  The idea of repairing the spaceship is of less relevance and there’s an increased focus on making the best of what they have.

Such tales need a villain and it arrives in the form a giant robot, complete with his own high-powered spaceship, who attacks the new planet and wants to steal their technology.  This allows the writers to create several decent, fast-paced escape scenes where Buzz and his semi-reluctant team use an array of skills to stay one step ahead.  A highlight is a sequence involving giant bugs and a cloaking device.

Lightyear won't blow you away but there are some nice touches.  Buzz has a cute robot cat which is of value in terms of his intelligence and his companionship.  I was also a fan of the auto-pilot device named I.V.A.N. and its dry sense of humour.  That’s not to say the film doesn’t have weaknesses.  Buzz isn’t the most interesting of characters and he comes across as very repetitive and one-dimensional.  It’s an example of where supporting players, like an introverted teammate voiced by Taika Waititi, are funnier and more compelling.

The original Toy Story is considered to be one of the great animated features of all time – because it was the first feature-length film to be fully animated using computers, and because of the strong emotional connection audiences built with the lovable characters.  Lightyear may keep children occupied for two hours but it doesn’t resonate as intensely.