Review: The Phantom of the Open 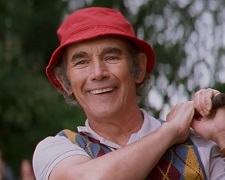 Given it combines two of my favourite pastimes, a golf movie is both a blessing and a curse.  On one hand, these films come along so infrequently that I feel compelled to enjoy and promote whatever is served up.  On the other hand, I have a thorough knowledge of golf which makes it easier to spot the flaws and general “dumbing down” of the storyline to appeal to non-golfing audiences.  Would a guy really hit 12 balls into the water on the final hole of the US Open like we saw from Kevin Costner’s character in Tin Cup?  I don’t think so.

The above thoughts were rummaging through my head while watching The Phantom of the Open, a new British comedy-drama.  The release in Australia is timely given it’s the same day The Open Championship kicks off at St Andrews in Scotland (go the Aussies!).  I’d fleetingly heard about this crazy true story before but now it’s been immortalised into a mainstream movie for a wider group to enjoy.  Golfers will get the most out of it but that’s not to say others can’t have fun and appreciate the eccentricities of its leading man.

The film begins in 1975 when Maurice Flitcroft (Rylance) loses his long-term shipyard job and is in search of new opportunities.  He stumbles across coverage of The Open Championship on television and then has some kind of weird dream/epiphany to take up the sport, win next year’s title, and claim the victory prize of 10,000 pounds.  His first step – learning the art at home but putting balls along the carpet into a mug at the far end of the living room.

It’s farcical to think a 46-year-old man could take up a sport like golf and become the best in the world within a year.  It didn’t stop Maurice from trying though.  Despite having no knowledge of the sport and no coaching assistance, he decided to give it a crack.  When entries opened for The Open Championship the following year, Maurice blindly ticked the “professional” box on the application form which gave him in a guaranteed start in the qualifying stage of the coveted event.  What followed was one of the worst displays of golf ever witnessed!

The story has been given a thorough glossing-up by writer Simon Farnaby in bringing it to the screen.  Significant alterations to the story create faux-drama which makes you realise it’s a very, very loose adaptation of the Maurice Flitcroft tale.  I wish it was more authentic.  If you believe the movie, these qualifying rounds had big crowds and were televised, complete with insightful commentary, across the globe.  None of this is true.  The Open Championship qualifiers aren’t even televised today let alone back in the 1970s.

That said, the heart of the story is still there thanks to a strong lead performance from Oscar winner Mark Rylance (Bridge of Spies).  He was one of the worst golfers to ever attempt to make it at a professional level but you grow to like the guy because of his enthusiasm and optimism.  The world keeps knocking him down and Maurice keeps getting up and marching on.  He may not have ever qualified for The Open Championship but there’s a nice footnote to the film which shows he did leave a small positive mark on the game.

With a cast including Sally Hawkins and Rhys Ifans, The Phantom of the Open is both messy and fun.