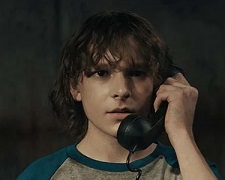 Released in the United States a month ago, The Black Phone arrives in Australia as a proven hit.  It has already grossed over $100 million USD at the global box-office and will turn a tidy profit.  Based on a short story authored by Joe Hill (the son of horror guru Stephen King) and directed by the skilled Scott Derrickson (Deliver Us from Evil, Doctor Strange), it reaffirms the public’s interest in a twisting horror-thriller.

Set in 1978, the story is centred on a small community in Denver where several children have disappeared.  The police and parents are clueless but as the audience, we know the person responsible is “The Grabber” (Hawke), a serial killer who is big on creepiness and light on intelligence and motives.  His latest target is Finney (Thames), a kid he shoved into the back of his black mini-van and is now keeping captive in the basement before deciding what to do next.

The story is largely told from two perspectives.  The first is that of Finney who must find a way to escape The Grabber’s clutches before it’s too late.  Introducing a splash of the supernatural, Finney is contacted by the ghosts of previous victims who offer their past learnings (what worked and what didn’t) in trying to get the upper hand on The Grabber.  The second perspective is that of Gwen (McGraw), Finney’s worried sister who has a few curious talents of her own which will help in saving her brother before it’s too late.

The Black Phone has stuff which is really good… and then other stuff which is questionable.  Starting with the positives, I enjoyed the blend of drama, horror and supernatural.  Such movies can become very formulaic (borrowing heavily from previous works) but this held my attention all the way through.  It’s got everything from simple jolt-out-of-your-seat scares… to heart-pumping escape sequences… to intriguing plot points involving the afterlife.

The film also features a superb lead performance from 15-year-old newcomer Mason Thames who goes through a range of emotions.  He skilfully portrays Finney as a shy, reserved kid who must step out of his comfort zone and harness every ounce of smarts and courage if he wants to survive.  Thames creates a character worth cheering for and this should set him up for more great roles in the near future.

Turning to the not-so-positives, the screenplay is littered with inconsistencies and contrived moments.  It’s the kind of movie where the more you think about it, the less sense it makes.  The police detectives are incompetent, the townsfolk don’t show much interest, and there’s an overexcited private investigator who adds nothing.  Perhaps the script is to blame but Ethan Hawke isn’t particularly convincing as the one-note serial killer.  A creepier individual with a clearer agenda could have added significantly to suspense levels.

It misses opportunities to become a standout within the horror-thriller genre but there’s still enough on offer in The Black Phone to warrant your time and money.