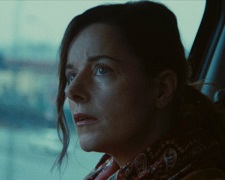 You can theorise and speculate but you never truly know how you’ll handle a perilous situation until it happens.  What will be your first instinct and will you regret it in the aftermath?  If you’re looking for a great film on this topic, check out Ruben Östlund’s Force Majeure from 2014.  An avalanche descends on a ski resort and, in a split-second decision, a man runs safety while leaving his wife and children behind.  Suffice to say it causes a bit of tension in the days which follow!

The Forgiven isn’t as strong but it taps into the same ideas.  David (Fiennes) and Jo (Chastain) are a well-to-do British couple holidaying in Morocco.  It sounds idyllic but they’d rather not be there.  Their relationship is strained and they’ve only made the trip so as to attend the party of an old friend (Smith) who they don’t like anyway!  Their actions reaffirm the saying – money doesn’t necessarily make you happy.

Driving in the middle of the night towards their holiday villa, the car strikes a local Moroccan boy and kills him instantly.  The bulk of the film is then devoted to the way in which this couple deal with the tragic event – both in terms of their physical actions and their mental scars.  As the driver of the car and someone who had a few alcoholic drinks before stepping behind the wheel, David becomes the film’s focus.  It’s a textbook case of grief’s five stages – denial, anger, bargaining, depression, and acceptance.

It’s the audience’s responsibility to size up these characters and form their opinions.  Was it a true accident or was David at fault?  Can his actions be forgiven by the boy’s family?  Does Jo have any responsibility to bear?  Should the party still go ahead?  Is it time to flee the country?  Writer-director John Michael McDonagh (The Guard, Calvary) leaves us with plenty to ponder in that the heroes and villains of this tale are not made clear.

The scenes involving Jo and the boozing party hosts/guests become repetitive but the film is at its best when following David.  Unwilling at first, he agrees to escort the body of the boy back to his home town and attend the funeral with his family.  I’ll leave it up to you to decide his reasons for doing so (guilt, remorse, forgiveness, fear) but most will agree it’s a terrific performance from Ralph Fiennes (The English Patient) who, as he often does, relishes the chance to play a complex individual.

Making the most of its Moroccan scenery, The Forgiven provides an interesting story worth reflecting on.