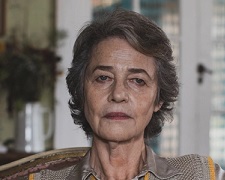 Juniper fits nicely into the genre I call “two people reluctantly coming together and unexpectedly helping each other out.”  There’s an element of predictability which such films but when done well, they remind us about the value of great friendships and connections.  This particular effort was funded by the New Zealand Film Commission and marks the feature film debut of director Matthew J. Saville (not to be confused with the Australian director of the same name – sans the J initial).

The two unlikely folk in this instance are a teenage boy and his grandmother.  He is Sam (Ferrier) – a rugby-loving kid who attends a boarding school in New Zealand and is struggling to deal with his mother’s recent death.  Rebelling against his father (Csokas) and the school principal seems to be his way of processing grief.

She is Ruth (Rampling) – an alcoholic, insult-loving grandma who broke her leg while living in England and has been brought by her son to New Zealand to recuperate.  The pair want nothing to do with each other at first.  Sam would rather hang out with friends than look after his injured nan (who he hardly knows).  Ruth hates the idea of being waited upon and yearns for her independence back.

With the dad conveniently written out of the story (he goes to London for “business matters”), the stage is set for the Sam and Ruth show.  She needs help physically, he needs help mentally, and they subsequently forge a much-needed friendship.  Ruth loves pushing his buttons and asking about his friends and his sex life.  Sam seems to enjoy their verbal stoushes and is quick to fire back with insults and pointed questions of his own.

The script is decent but it’s the two worthy central performances which drive the film’s emotional soul.  The experienced Charlotte Rampling (45 Years) has fun in portraying Ruth as a 70-something-year-old woman with a 20-something-year-old mindset.  She delivers her barbs with precision.  In the case of newcomer George Ferrier, Juniper marks his first lead role in a motion picture and he brings the right amount of innocence and naivety to the character of Sam.  Hopefully this is the start of fruitful career.

Released in New Zealand almost a year ago, it’s taken a while for Saville’s film to make it across the Tasman Sea and it’s nice to see it getting a run, albeit a limited one, in this country.