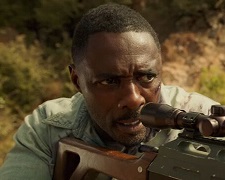 It’s a scenario ripe for a great action-thriller.  A family is stuck in a South African safari park and, with no working car and no phone reception, they must find their way back to civilisation while avoiding a hungry, vicious lion.  Icelandic director Baltasar Kormákur (Everest) extracts maximum tension through the use of long, continuous shots and convincing visual effects.

It’s just a shame the writing team have fallen back on tropes and cliches to over-sell the drama. You could throw any group of individuals into that situation and it’d work.  Instead, they’ve goes with a single dad (Elba) struggling to bond with his two teenage daughters (Halley and Jeffries) following the loss of his wife (they were separated at the time) to cancer.  The purpose of the 10-day trip is to spend “quality time” with the kids and show them where their late mother grew up.

He’s been a pretty average dad of late and so the life-threatening situation involving the killer lion serves as a contrived way of earning redemption.  He can show his two daughters that he’s “there for them” by putting his own life on the line to save them.  Oh, and what’s behind the particular lion being so nasty?  Turns out it has a heightened sense of awareness and is striking back against the actions of villainous poachers.

There’s one other character of note.  South African Shalrto Copley (District 9), getting a rare chance to film a big Hollywood movie in his home country, plays an old friend who serves as their safari tour guide.  Yes, it’s a cheesy storyline but the cast make it work.  They speak normally and, when put in perilous situations, they act in a way you can appreciate and understand.  There are moments when they need to be saved… and others when they need to do the desperate saving.  Idris Elba (Beasts of No Nation) also deserves praise for bringing the right mix of strength and vulnerability to the lead role.

Above all else, it’s the gripping action sequences which will keep you engaged.  I applaud the approach of Kormákur to limit editing and go with long takes.  It made it a tougher shoot (lots of time going into rehearsals) but the end result is worth it.  It’s as if we’re looking through the eyes of a news camera operator as they follow these characters and the locations they visit.  One of the best scenes involves a deserted village with the camera slowly moving between structures in search of clues and information.

Give it a look!