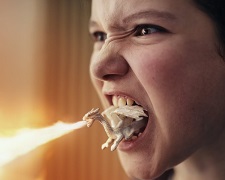 Filmmakers come from a variety of backgrounds, but this is the first time I’ve watched a movie directed by an Archibald Prize winner.  Regarded as one of the highest honours in the world of Australian art, the annual $100,000 reward is presented to the artist who crafts the best portrait of a distinguished individual.  Del Kathryn Barton took the honours in 2008 for her self-portrait, and then again in 2013 for depiction of Australian actor Hugo Weaving.

Blaze is a movie that impresses at all levels.  The distinctive imagery is striking (you’d expect that given Barton’s background) but the intricate script, delicate characters, and subtle performances are just as good.  It begins with a shy 12-year-old girl, Blaze (Savage), witnessing a heinous sexual assault and subsequent murder in a treelined, suburban laneway.  She hid in a small nook so as not to be spotted by the perpetrator.

The film then delves into two main subplots.  The first is a more traditional narrative around justice.  Blaze was the only witness to the crime and so she must identify the murderer in court and describe what she saw.  She will face a tough interrogation from the defence team who will do whatever it takes (they stoop very low) to sow doubt in her mind, and make her appear a confused, unreliable witness.  Blaze’s father (Baker) tries to shield his daughter from the trial’s severity but there’s only so much he can do given its importance – particularly to the family of the victim.

The second subplot takes us inside Blaze’s troubled, fractured mindset when no one else is around.  Dealing with intense trauma is difficult for most adults let alone an innocent 12-year-old who lacks the maturity to fully understand what transpired.  Barton finds a way of “visually” showing Blaze’s tortured feelings by using imaginary, fantastical creatures.  This is illustrated on the film’s confronting poster which shows a small dragon breathing fire from Blaze’s mouth – a scene from the movie where she struggles to control her anger.

Newcomer Julia Savage is sensational in the title role and deftly displays the wave of emotions you’d expect from a kid put through such a situation.  There are moments when her anger bursts to the surface, and other moments when she’s overcome with guilt about not preventing the crime.  Simon Baker (Margin Call) is also very good as the softly spoken dad who wants to fully support his daughter but is struggling to work out the best way to do so.

Abuse and trauma are tough subject matters and so there are valid reasons for some not wanting to see this.  One hopes we never have to deal with what these characters are put through, but Blaze provides an eye-opening, gut-punching reminder that the world can be a messed-up place… and there are people who can help us deal with it.