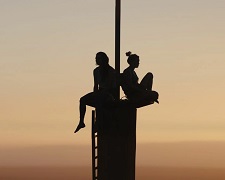 I am terrified of heights and so any movie which can capture the distressing “thrill” of being inches from falling to one’s death… yeah, that’ll get my heart pumping.  A case in point is the head-shaking true story of high-wire artist Philippe Petit who walked along a tiny steel cable between the two World Trade Centre towers in 1974.  It was chronicled in the Oscar winning 2008 documentary Man on Wire, and in the impressive 2015 biographical drama The Walk (starring Joseph Gordon-Levitt).  Both films turned me into a sweaty mess!

Fall is a purely fictional thriller that creates a riveting scenario but does so in a heavy-handed manner.  Two experienced rock climbers scale a narrow, no-longer-used television tower in a remote part of the United States.  At roughly 600 metres in height, they note it’s twice as tall as the Eiffel Tower.  Audiences will cheer for their survival but there’s no arguing that their actions are grossly irresponsible.  The ladder is rusty, many bolts are loose, and the structure looks like it could fall over at any moment.

The over-written backstory to these two characters is unnecessarily contrived.  Shiloh (Gardner) is a vlogger who constantly puts herself in dangerous situations and then uploads to YouTube and other social media sites in search of likes, publicity, and attention.  She’s full of “I’ll rest when I’m dead” energy and, despite her negligence, loves a motivational speech – “if you don’t confront your fears, you’ll aways be afraid.”

Becky (Currey) is at a different phase of her life.  She lost her young husband a year ago in a rock-climbing accident and she’s since been stuck in a depressive phase involving alcohol and drugs.  Having not climbed at all since her husband’s death, she’s been convinced by Shiloh to put aside her grief and return to a rich, exciting life.  As an added touch, they come up with the idea to spread the husband’s ashes from the top of the television tower as a tribute to his own adventurous spirit.

It’s a goofy opening (did we really need to see Becky with the pills?) but thankfully, the film doesn’t spend too much time on foreplay.  It only takes about 30 minutes for the pair to ascend to the top of the tower where the rusty ladder breaks and they’re stuck on a tiny platform.  With no mobile phone reception (conveniently unlucky), they must work together to signal for help and/or find a way down.

Directed by British filmmaker Scott Mann (Heist), Fall milks this scenario for all its worth and creates some wonderfully tense scenes.  The work of Spanish cinematographer MacGregor (he just goes by the one name) is superb and he exploits an array of creative camera angles (sometimes looking up, sometimes looking down) to highlight the sheer insanity of their predicament.  Just like a great horror flick, sound technicians add to the suspense through perfectly timed noises – whether it be a strong gust of wind, a creaky ladder, or a shrieking vulture.

The finale should have been better (it’s rushed and features a dumb twist) but the excellent middle act in Fall leaves a strong enough impression to justify a thumbs up recommendation.