Review: See How They Run 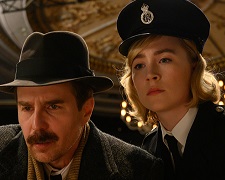 A real murder set in the middle of a fake murder.  That’s the creative premise on offer in See How They Run, the debut feature film of British director Tom George (This Country).  It takes us back to London’s West End in the early 1950s when Agatha Christie’s whodunit The Mousetrap was making its debut in front of packed, adoring crowds.  As this movie begins, the play’s cast and crew are celebrating their 100th performance – a milestone many didn’t think they’d reach (humorously ironic given the show would become the longest running in the world).

Oscar winner Adrian Brody (The Pianist) steps into the shoes of Leo Köpernick, an American screenwriter who has been contracted to transform the play into a Hollywood movie.  He rubs people up the wrong way and doesn’t seem to care.  From hitting on partnered women with his sleazy one-liners, to wanting to make significant revisions to the screenplay to include more action, Leo is not well liked.

It will therefore come as no surprise to audiences to see him wind up dead in the film’s opening act.  He was backstage in wardrobe department when attacked by a mysterious figure wearing a long cloak and a felt hat.  Everyone has a motive (as you’d expect) and called in to solve the crime is a dispirited Inspector Stoppard (Rockwell) and his overexcited assistant, Constable Stalker (Ronan).

Such an idea could come across as overly corny (the actors in a whodunit are now part of a real whodunit) but screenwriter Mark Chappell (Flaked) makes this work with well crafted dialogue.  The best material is saved for Sam Rockwell (Three Billboards Outside Ebbing, Missouri) and Saoirse Ronan (Brooklyn) who are excellent together.  They’re polar opposites, in terms of both personality and approach, but they gravitate towards an amiable middle ground with each passing scene.  Seeing them interact is worth the price of admission alone!

The film also works as a credible, “see if you can pick it” mystery.  There’s a fun blend of truth and fiction as elements from The Mousetrap start to play out in reality (like a scene where the actors all congregate together).  I wish more was made of the character but even Agatha Christie (nicely played by Shirley Henderson) makes an appearance at an opportune moment.

Moving at a fast pace (it’s just 98 minutes) and boosted by its strong performances, See How They Run will entertain the vast majority of those who see it.