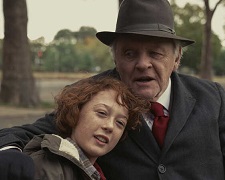 It’s a pitch we’ve seen before.  A respected directed, with several films already under his belt, gets the funds to create a personal, semi-autobiographical drama based on their upbringing.  Examples which spring to mind include Almost Famous (Cameron Crowe), The Squid and the Whale (Noah Baumbach), Roma (Alfonso Cuarón), and Belfast (Kenneth Branagh).  We’ll be seeing one from Steven Spielberg in a few months when The Fabelmans, currently the Oscar frontrunner, is released in Australia.

Armageddon Time is James Gray’s entry into the genre.  He’s been in the business for three decades with credits such as Little Odessa, The Yards, The Lost City of Z, and Ad Astra.  This new film taps into his 1980s upbringing in Queens, New York and it’s very much “by the book”.  He starts out as a naïve, rebellious 11-year-old and, after a series of awakening events, he is transformed into a better person who more clearly sees the world for what it is.

In his first starring role, 14-year-old Banks Repeta steps into the shoes of protagonist Paul Graff.  He’s a cheeky kid who puts minimal effort into his schoolwork given he much prefers art over arithmetic.  The same personality shines through at home with Paul not afraid to push the buttons of his Jewish parents (Hathaway and Strong) to get his own way.  There’s a humorous early scene where Paul takes it upon himself to order take-out as opposed to eating his mum’s cooking.

There are two people in Paul’s life who he respects and confides in.  The first is his elderly grandfather, warmly played by two-time Oscar winner Anthony Hopkins (The Father), who realises this fact and tries to steer Paul in the right direction with wisdom and good advice.  The second is an African American kid from school (Webb) who opens Paul’s eyes to the difficulties faced by those from low socioeconomic backgrounds.

We’ve seen this type of movie before but Armageddon Time succeeds on account of its strong performances.  Youngsters Banks Repeta and Jaylin Webb are both very good and, for the most part, capture the immaturity and childlike conversation that you’d expect from pre-teenagers.  Anne Hathaway and Jeremy Strong neatly illustrate their own characters’ uncertainties while Anthony Hopkins will warm hearts as the granddad who understands the preciousness of time and how we must make the most of it.

A few elements add unnecessary padding (like the Jessica Chastain cameo) but I enjoyed Armageddon Time as a well-told, well-acted drama which may rekindle our own childhood memories.