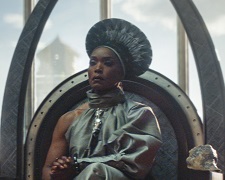 The Marvel Cinematic Universe has a well-established fan base but there’ll be heightened interest in this new entry for two key reasons.  Firstly, the original Black Panther received more combined critical and industry acclaim than any other superhero movie in history (The Dark Knight would be a close second).  It won the Screen Actors Guild Award for best ensemble and was nominated at the Academy Awards for best picture (it didn’t win but it took home Oscars in 3 other categories).

Secondly, Marvel Studios has decided to continue with the franchise despite the unexpected death of star Chadwick Boseman in 2020 at the age of 43.  Credit to the writers for not trying to pull off a silly Fast and the Furious-type gimmick where they pretend Paul Walker’s character still exists within that world.  It’s a little clumsy and unemotional but the death of Black Panther is addressed in the opening scene where, despite an abundance of medical machinery in Wakanda, he dies off screen because an “undisclosed illness.”

We then skip the worst of the grief and pan a year into the future where a new tale can begin.  The citizens of Wakanda thought they were the only nation on earth to possess vibranium but it transpires a hidden colony at the bottom of the sea filled with Avatar-like blue people also has reserves of the powerful mineral.  Its ageless leader (Huerta) prefers offense to defence and has reached out to the Wakandans to form a military alliance.  The questionable plan is to then attack the leaders of villainous countries such as France and United States who are looking to steal vibranium for their own “gotta look after global security” reasons.

With no Black Panther, a fact we’re reminded of repeatedly, the bulk of the responsibilities fall upon his white-haired mother, Ramonda (Bassett), and his technology-loving sister, Shuri (Wright).  The elder provides wisdom with a splash of well-timed anger, while the younger offers naïve enthusiasm with a pinch of humour.  They need to exercise good judgement in deciding when it’s best to sit on the fence and stay neutral, and when it’s best to pick a side and step into conflict.

For a movie which is 161 minutes long, I expected a stronger, deeper narrative.  There’s a lot of people making threats and talking up a “big game” but their motives are flimsy, simplistic and repetitive.  The balance is also askew with the supporting cast.  Dominique Thorne (Judas and the Black Messiah) as a gifted 19-year-old student, and Michaela Coel (I May Destroy You) as a highly trained warrior deserved more screen time and development.  On the other hand, an American subplot involving Martin Freeman and his ex-wife/boss adds nothing and should have been left on the cutting room floor.

I’ve admired the previous efforts of director Ryan Coogler (Fruitvale Station, Creed) but the lack of a meaningful, fast-paced storyline limits his abilities here.  He tries to keep us engaged with colourful CGI, changes in speed (slow-motion, reverse-motion), and lengthy musical interludes featuring the likes of Rhianna but it’s not enough to inject sufficient energy into Black Panther: Wakanda Forever.  It’s not terrible but it’s still a disappointing sequel.