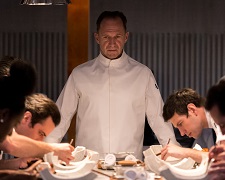 There’s an early scene in The Menu where head chef, Julian Slowik (Fiennes), comes out from the kitchen and addresses the customers in his exclusive 12-seat restaurant.  He talks about how bread has existed for 12,000 years, is one of the simplest foods imaginable (flour plus water), and has become a staple in poorer communities.  He then serves up a “breadless bread plate” – tasty dips with nothing else.  His rationale?  Bread is food for the “common man” and the wealthy, successful, hoity-toity folk in the room don’t meet that description.

This sequence helps articulate what’s on offer in this new film from director Mark Mylod (Game of Thrones, Succession).  Movies about food tend to be heartfelt and entertaining (Big Night, The Lunchbox, Ratatouille) but The Menu has been crafted as a dark, unsettling comedy where you’re never quite sure what will happen next.  Each guest, personally selected by Slowik, has stumped up a farcical $1,250 for the 4+ hour degustation but it’s not long before the meals become secondary to the “experience”.

The Menu is the cinematic equivalent of a “hot mess”.  It’s engrossing and hilarious while also being chaotic and disjointed.  To focus on its weaker points… it’s very on-the-nose with its messaging and doesn’t give enough attention to its many supporting characters.  Tony Award winners Judith Light and Reed Birney play a long-married couple but, aside from a small plot reveal around the half-way mark, we don’t know enough about them to care.  I’d also argue the finale doesn’t pack a particularly strong punch.

I still had lots of fun though!  Ralph Fiennes (The Grand Budapest Hotel) is sensational as the playful/insane chef, Nicholas Hoult (About a Boy) is excellent as an increasingly selfish foody, and Hong Chau (Downsizing) steals a bunch of scenes as the restaurant’s disciplined captain.  There are many random, laugh-out-loud moments which will appeal those with warped comedic tastes.  These vary from the nonchalant actions of staff (like the sommelier) as things go crazy… to the written descriptions of each dish which are provided on screen (the last one is a cracker).

Mark Mylod doesn’t want to go unnoticed and adds an interesting directorial stamp.  A great example is the quick transitions between conversations as the camera seamlessly moves around the restaurant’s dining area.  The sudden clapping of hands by the kitchen staff, combined with a perfectly timed edit, provide a jolt to those within the film… and also to those watching the film.

A great movie to debate and dissect with friends, The Menu is worth making time for.