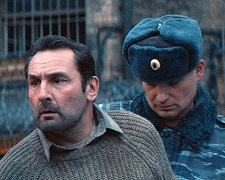 The word has been used in Russia for several decades but in 2017, “kompromat” made its way into the English database of Dictionary.com.  It is defined as “compromising and incriminating material that is sometimes forged or fabricated, used to sabotage or discredit a political opponent or public figure.”  It came to prominence within the media when allegations emerged that Russian officials had gathered “kompromat” on President Donald Trump which could be used against him.

This new French drama is the tale of an Alliance française director, Mathieu Roussel (Lellouche), who has spent several months posted to the Siberian region of Russia along with his wife and young daughter.  Mathieu doesn’t know precisely why (there’s several possibilities) but he’s annoyed someone within Russia’s powerful Federal Security Service (FSB) who have fabricated evidence to charge him with child abuse and accessing child pornography.

Facing a 15-year stint in prison, a small group of people will do their best to get Mathieu out of the country before the trial.  These include his no-nonsense defence lawyer, a Russian co-worker (Kulig), and officials at the French embassy in Moscow.  On his tail are a group of nasty looking FSB folk who travel across the country in pursuit of their target after skipping his house arrest.

The film is clunky in the way in which it portrays Mathieu.  There’s an early scene where he hosts Russian officials at a French ballet which includes homoerotic themes.  Suffice to say the officials don’t take it well.  On the other hand, we see him being quite resourceful as he sneaks around the country avoiding detection.  It’s hard to believe a French teacher could be so blind to basic Russian culture while also having the skills of Jason Bourne.

There’s still much to take away from this however and the fact it’s based on actual events is high on that list.  It highlights the corruption that exists within the Russian government and the ways they can use the police, the media, and the judicial system to silence those who don’t share their views.  It also reminds us that not everyone in Russia supports the controlling government and, through the character of Svetlana, we learn there are people willing to risk their own lives in defiance.

Those looking to know more about the subject may be interested in Yoann Barbereau’s memoir, Escape from Siberia: My Epic Journey to Freedom, which delves more into the true story behind Kompromat.  While this film is rough around the edges, it’s a yarn deserving the full big screen treatment.