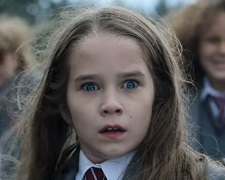 There is no doubt (warning: there may be doubt) that Matilda the Musical is one of the best stage shows of the 21st Century.  Roald Dahl’s 1988 novel was already terrific… but Dennis Kelly (book) and Tim Minchin (music and lyrics) transformed it into a musical which is just as memorable.  It’s humorous, it’s emotional, and it’s not afraid to get really dark (a rarity when it comes to family-oriented stuff).  It boasts a fantastic, well-crafted music score and, through performances across the world, has allowed a plethora of young actors to showcase their rising talents.

It was always a matter of when, not if, the show would be adapted for the big screen.  It has been spruiked since 2013 and after years of waiting, director Matthew Warchus (also responsible for the stage musical) has finally completed what fans have been waiting for.  It’s not a like-for-like adaptation however.  A few changes have been made to trim roughly 20 minutes and have it sneak in under the two hour mark (for the benefit of those with shorter attention spans).

If you’re new to the material, it’s the tale of super smart young girl named Matilda who is the product of two selfish, ignorant, rotten parents.  Unable to find proper adult guidance at home, two kind people fill the gap – a knowledgeable librarian who provides wonderful books to read, and a softly-spoken schoolteacher who can easily detect Matilda’s intelligence.  In addition to the parents, there’s one more villain threatening to upend Matilda’s life – the nasty, power-hungry school headmaster who thinks of children like scum.

I’m a fan of Matthew Warchus (Pride) but the direction here is a little scrappy and haphazard.  When compared to some of the great modern day movie musicals (e.g. Moulin Rouge, Chicago, La La Land) you’ll realise the elaborate musical numbers don’t flow smoothly.  A little magic has been lost in the editing room with the uneven mix of close-ups and long shots.  One exception is the “School Song” which comes across very well.

Despite those qualms, it’s hard not to be won over by this movie given the strength of the source material.  The songs are so damn good!  Warchus has also struck gold in finding 13-year-old star Alisha Weir who has a fantastic voice and the perfect look for the title role.  She beat out thousands of others as part of a lengthy audition process.  Emma Thompson continues her sensational year (hot on the heels of Good Luck to You, Leo Grande) and creates an ideal can’t-wait-till-she-gets-what-she-deserves villain in headmaster Miss Trunchbull.

It’s hard to match the joy and energy that comes from a live performance and while this adaption falls a touch short, it’s still heaps of fun.