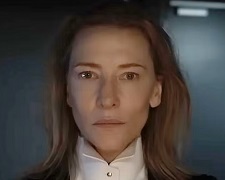 I’ve had three months to stew over Tár given the lengthy lag between its local premiere at the Brisbane Film Festival and now its broader, unusually late release across Australia.  That’s a good thing because it’s the kind of movie where the more you think about, the more you appreciate it.  It’s been 16 years since Oscar-nominated director Todd Field made a movie (In the Bedroom, Little Children) and the wait has been worth it.  This is a riveting character study that will take a long time to unwrap depending on which piece of tight sticky-tape you attack first.

The movie is centred on a fictious, EGOT-winning composer-conductor named Lydia Tár (Blanchett).  From the way she is adored and respected by audiences in the early scenes, you get a clear sense she’s the Tiger Woods of music composition.  There’s very little left to achieve professionally but her latest project is to conduct a live, 70-minute performance of Gustav Mahler’s 5th Symphony – the only one of the famed composer’s symphonies she has not yet tackled.

One theme Tár delves into is the connection, and sometimes disconnection, between the way celebrities are perceived professionally as opposed to privately.  There are folks behind the scenes who don’t like Lydia Tár because of her arrogant, selfish nature and her disrespect of hard-working staff.  At what point does that start to tarnish her image and legacy?  Can she get away with more given her talent?  It’s akin to passionate fans turning a blind eye to a gifted footballer’s “off-field discretions” purely because he is so important to a team’s performance.

Another question to ponder is whether Lydia Tár is the villain of this story?  It’s hard to appease everyone in life and while yes, she is harsh when speaking with her orchestra and support staff, is “tough love” something that must be dished out to be the world’s best?  Where’s the line between merely having high standards, and being downright abusive?  When you’re on top of your profession and everyone wants a piece of your time, is making enemies inevitable?  Several critics/viewers have made comparisons with the 2014 Oscar-winning drama Whiplash which explores the same subject but from the perspective of the student as opposed to the teacher.

Australian Cate Blanchett has seven Academy Award nominations to her name (she won for The Aviator and Blue Jasmine) and she’s about to be anointed again for her unforgettable performance as Lydia Tár.  Just as she did in Blue Jasmine, Blanchett has created a multi-faceted protagonist who could be judged in any number of ways.  A focus will be towards the effect she has on others, but I’m also still pondering how self-aware she is of her own strengths and weaknesses.  Todd Field has been cryptic in interviews and wants audiences to form their own answers to the questions posed.

With one of the best final scenes you could ever imagine, Tár is a stellar piece of cinema.