Review: What’s Love Got to Do with It? 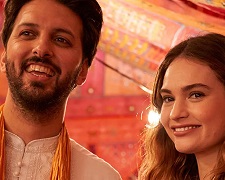 Marking the first feature film of Indian director Shekhar Kapur (Elizabeth) in 15 years, What’s Love Got to Do with It? is a British romantic comedy centred on two close friends/neighbours looking for love via different methods.  Zoe (James) is an award-winning documentary filmmaker in search of guys through dating apps.  Kaz (Latif) is doctor who has agreed to a semi-arranged marriage to a shy Pakistani woman (Aly) from he’s only just met.

These two are surrounded by folks willing to offer opinions, whether warranted or not.  These include Kaz’s deeply conservative parents still trying to heal other rifts within the family.  There’s also Zoe’s nosy, inquisitive mum (Thompson) who offers blunt martial wisdom while unashamedly slagging her own ex-husband.  BAFTA nominated actor Asim Chaudhry (People Just Do Nothing) makes the most of his scenes as the progressive boss of a matchmaking business humorously named the “Matrimonial Advice Bureau.”

First time screenwriter Jemima Khan adds an extra layer by creating a film within the film.  Having obtained approval from her sceptical bosses, Zoe gets approval to make a documentary about Kaz’s upcoming arranged marriage.  This provides an opportunity for characters to speak directly to the camera and open up about their thoughts.  It also serves as a vehicle for other people, unrelated to the main show, to speak of differing experiences within the subject of arranged marriages.

As is often the case with romantic comedies, it’s hard to shake a lingering sense of predictability throughout.  You know where this film is heading at all times.  There’s still a lot on offer though.  Stars Lily James (Cinderella) and Shazad Latif (Star Trek: Discovery) are a nice pairing as they engage in intense, intelligent conversations and try to change the other’s views.  Emma Thompson (Good Luck to You, Leo Grande) continues her stellar year as the well-intentioned, not-so-culturally-aware mum who unknowingly slips up with backhanded compliments.

Through its two lead characters and a few quick facts (like figures around divorce rates), What’s Love Got to Do with It? entertainingly highlights both the similarities and differences between societies when it comes to finding romance.  It reminds us there’s no “right” way.  It’s up to each individual to identify what works best for them.  I can’t fault that message.